The Renovation of LWR 6 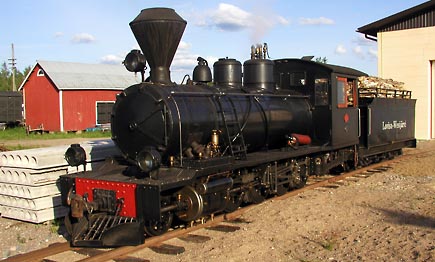 Loviisa-Wesijärvi Railway (LWR) number 6 was built in Tampere at the Tampere Linen and Steel Mill, otherwise known as the Tampella Factory. The locomotive was finished in 1909, and received Tampella builder's number 141.

Wood-burning LWR 6 is a two cylinder 2-8-0 -a four-coupled locomotive with a single-axle (two-wheel) leading truck to steady it on curved track. The locomotive's tender, which carries the wood and water it uses to make steam, has two two-axle, four-wheel trucks.

Interestingly, LWR 6 was outfitted by Tampella with a superheater, an unusually early application of this technology; steam from the boiler is superheated in the firebox before it is sent into the cylinders so that the steam is used more efficiently. The locomotive's working boiler pressure is about 10 kilos/m2, and the boiler's water capacity is about 3.3 m3. The tender carries about 8.5 m3 of water and the fuel bunker's capacity is 5 m2.

LWR 6 is equipped with steam brakes and the tender is hand-braked. The weight of the locomotive and tender in use is 54.5 tonnes.

LWR 6 was actively used a total of 51 years from 1909 to April 19, 1960, when the Loviisa-Wesijärvi Railway ceased narrow gauge operations and was converted to broad-gauge. The locomotive was moved to Loviisa City Museum property and was set up as a monument in Loviisa's town center.

After negotiating with the city, on September 23, 1982, the Museum Railway Association moved the deteriorating LWR 6 to Minkiö and stored inside. Later, the towable locomotive was painted for display at the Narrow Gauge Museum.

In 1994, the Museum Railway Association produced a long-range plan which had the restoration of a third steam locomotive to operable condition as a key goal. Another locomotive had become necessary because the newly-finished extension to Humppila had brought an increase in the number of visitors to the museum, and the maintenance requirements of the two usable locomotives grew considerably with increased use over a longer route, even though they were both in good condition. It was therefore sensible to restore one more locomotive so that necessary maintenance and repair work on the other locomotives would not disrupt regular service or place too much strain on the volunteers who maintain the locomotives.

Although it was in poor condition in 1994, the LWR 6 was a good candidate for renovation to operating condition for several reasons. LWR 6 is technically very similar to the Museum Railway's operable Hyvinkää-Karkkila 5; moreover, spare parts for a Finnish-made locomotive are easier to come by than they would be for some of the other foreign-made locomotives in the Museum, due to the ready availability of parts from stockpiled broad-gauge VR steam locomotives.

The problem really was that the locomotive did not belong to the Museum Railway Association, but to the city of Loviisa. However, after negotiations with the city of Loviisa, the locomotive was donated in its entirety to the Association, and negotiations with the Ministry of Transport and Communications for funding to support the restoration effort came to a favorable conclusion in time for the substantial renovation of LWR 6 to begin in the fall of 1996

The locomotive was renovated in Jokioinen at the workshop of Jomeco Oy. Part of the renovation was performed by the employees of the workshop and paid subcontractors from outside the firm, but tasks which required special a steam locomotive related expertise, including the design and management of the restoration process, were done by Museum Railway members who volunteered their skills and time to complete the project.

The locomotive was taken completely apart. The tender was restored first, and stored at Minkiö. Then the piece-by-piece work of repairing the locomotive itself began. The boiler of the locomotive had all of its tubes renewed. The valve gear, which had been converted in 1934 to the Heusinger style, was returned to its original Stephenson design by completely recreating the old machinery, using models and old drawings as guides for the restoration.

The badly deteriorated cab of the locomotive was completely rebuilt, and many of the other parts which had been damaged or lost were replaced with comparable parts from broad-gauge VR steam locomotives. Also all-new piping for the boiler, waterfeeder and brakelines was made.

Along with the renovation, the locomotive was restored to its 1920's appearance, with a black paint job, instead of locomotive green. The valve gear was rebuilt according to the original model, a new smoke-stack was made using that of the Hyvinkää-Karkkila 3 (then stored in Minkiö) as a guide and a working acetylene gas light system was built into the locomotive. Originally the locomotive was wood-burning, but later it was converted to coal burning like all the other locomotives of Loviisa-Vesijärvi railway. At the moment LWR 6 is the only steam locomotive in Finland with a copper fire box. 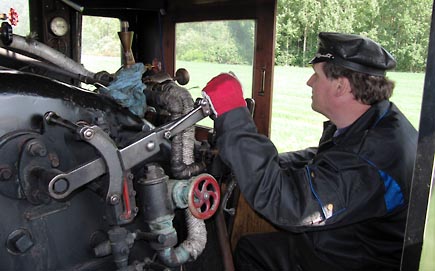 The finishing touches were made mainly in the spring and summer of 1998. The very time-consuming and expensive renovation culminated on Saturday the 15 of August 1998, when the completed locomotive was loaded at the factory into a truck with a flat bed trailer and brought to Minkiö, where it was pulled straight from the trailer onto the track.

The tender, already stored at Minkiö, was attached to locomotive, and that same evening at 7:17 PM, the firebox was lit. LWR 6 moved under its own power for the first time in 38 years, 3 months and 26 days on Sunday August 16, 1998 at 2 PM.

Events and voluntary work in 2023