This is a blog about restoration of the Hyvinkää-Karkkila Railway passenger coach number 2 at the Jokioinen Museum Railway.

In 1911 two combined second and third class passenger coaches were delivered for Hyvinkään-Pyhäjärven Railway (later Hyvinkää-Karkkila Railway). The coaches were built by the Sandvikens Ship Yard & Mechanic Shops in Helsinki. The coaches got number 2 and 3. The coach undergoing restoration at the Jokioinen Museum Railway is the coach number 2.

The Hyvinkää-Karkkila Railway closed down in 1967. After that the coach was preserved outdoors as a part of a preserved train at the Karkkila buss station. The coach was standing there together with the HKR3 steam locomotive, guards van n:o 5 and the goods wagon G19 until year 1993. After spending 25 years under rain, snow and sunlight (and the local youngsters with their markers) had left their marks on the coach. In the spring 1993 the whole train was moved to Jokioinen Museum railway. After that the steam locomotive of the train has been returned to Karkkila after a cosmetic restoration.

Started in 2003, the coach restoration work is to restore the coach as closely as possible to its original condition. Although the coach had been changed over the years, it has, however, retained the original damper upholstery and window division. Inside underneath the plywood the original paneling was saved. Also the structures of old roof were partly tucked inside the new roof. 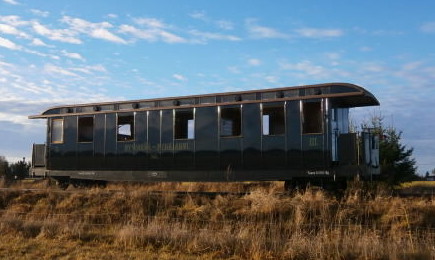 The ex Hyvinkää-Karkkila Railway passenger coach which has gone through a long renovation was having first test runs in the end of November when a frame of a Jokioinen railway passenger coach was sand blasted and painted in the Minkiö workshop. During the autumn and winter a lot of work has been completed on the coach. New parcel shelves, new hand rails for the end platforms, new trimming and new windows have been completed. 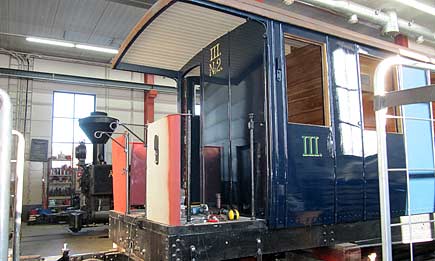 Finishing of Hyvinkää-Karkkila passenger coach have been well on progress in the beginning of new year. In few months many visible things have been done, like installation of the fresh air vents of the lantern roof. Also the hangers for the end lamps and decoration structures have been mounted in the wagon's ends. 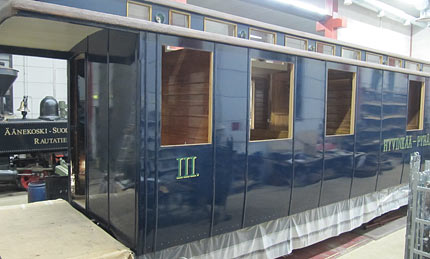 The blue colour of Karkkila coach got the final touch on the second week of December when a paint shop hired to paint the coach applied the last layer of varnish on the walls. There are two layers of varnish to protect the paint against scratches and sun light and to give the final shiny touch on the surface. 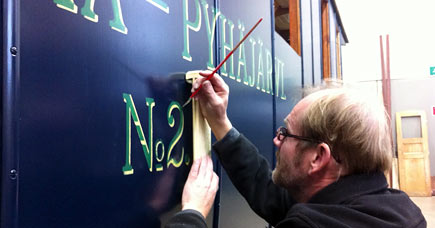 Finishing of former Hyvinkää-Karkkila railway passenger coach is going well after painting its outer skin. In the end of October the railway logo texts and class numbers were painted in the outer walls.

In the weekend a work started to renovate one of the outside doors. The door was found to be all right condition, except the lowest piece of wood that was completely rotten. A new piece of wood was made of a large piece of birch wood. On Sunday also the second outside door was taken under work by starting to remove the old coats of paint.

Also the work on the down sliding windows continued. The original metal springs were assembled in the metal window boxes. The weight of the window will be on top of the spring when window is on its lower position. The window frames are in quite a bad condition after being sand blasted at least once and exposed to elements during the 30 years the carriage was on display in a city park of Karkkila. Probably at least a part of the windows requires replacing.

Pictures of the work 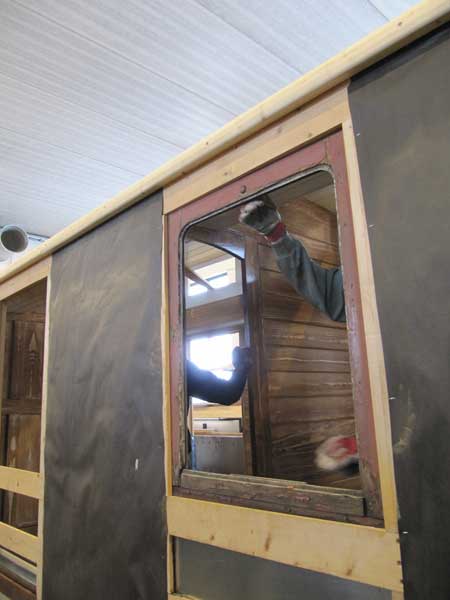 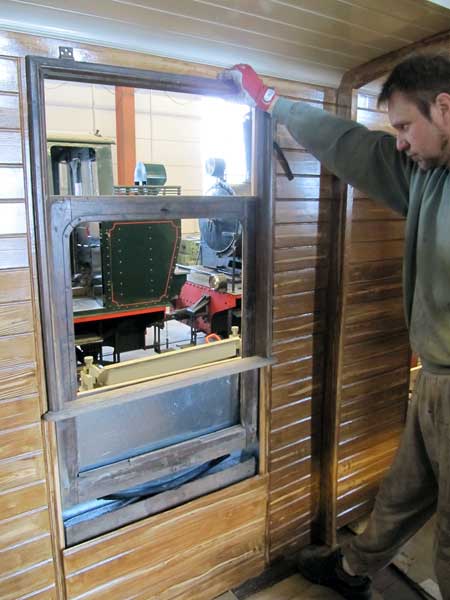 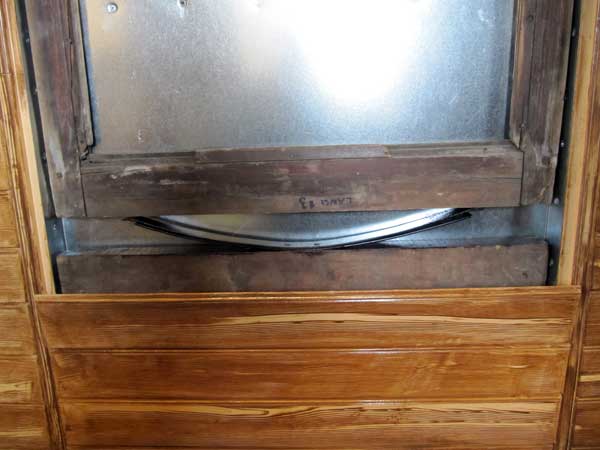 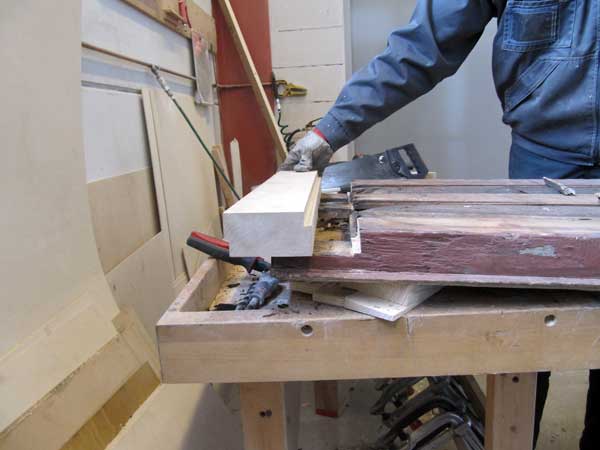 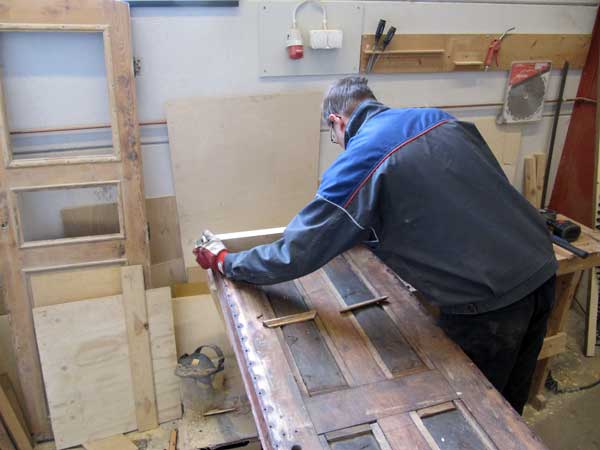 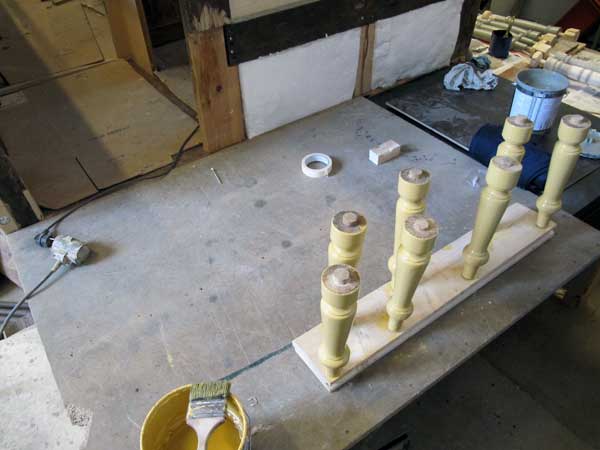 Metal to window boxes and paint to walls

On the third weekend of January (15.-17.1.2010) the work on the coach continued with painting and preparing the structures for windows.

The ceiling of the second class got its final coat of paint. Some parts of the ceiling had to be still filled and sanded, so there are areas where more painting is required. The interior walls of the third class were primed with new light brown premier. The walls will be grained to imitate grain of oak wood.

The work on the third class benches continued with final filling, sanding and priming. Also these benches will be grained to reassemble oak wood, but with more yellow tone than on the walls. The second class seats will be upholstered.

The work with window openings continued by making a sheet metal boxes under the windows. The opening windows can be lowered to these boxes and the water proof boxes will collect all the moisture and water which will be directed out with a copper pipe. This will avoid the water and humidity to damage the wooden structure of the car body.

(you can get to the picture gallery by clicking thumbnails) 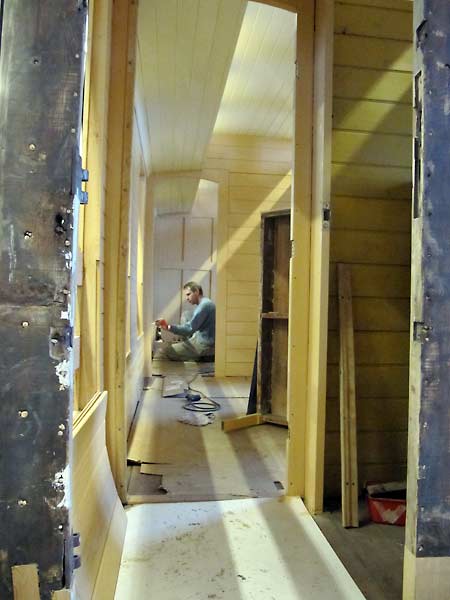 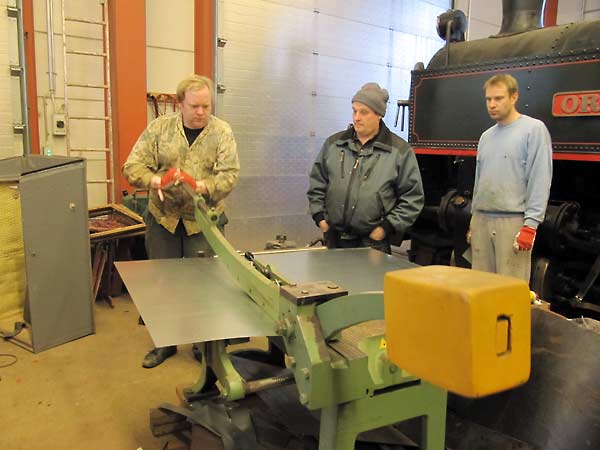 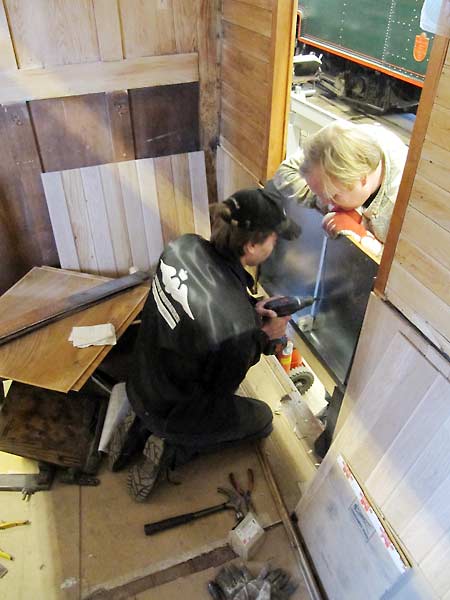 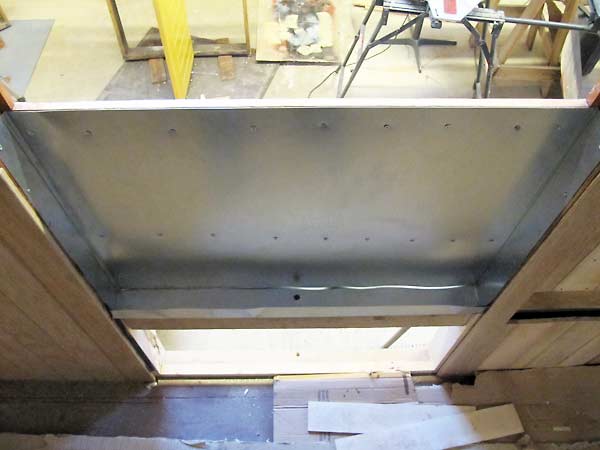